This past Sunday Writers in the Mountains in partnership with Glaring Omissions Writing Group co-hosted a panel discussion Writing Fiction Today – Literary vs. Genre Fiction: Real Distinction or No Difference at All? at the Golden Notebook bookstore in Woodstock. 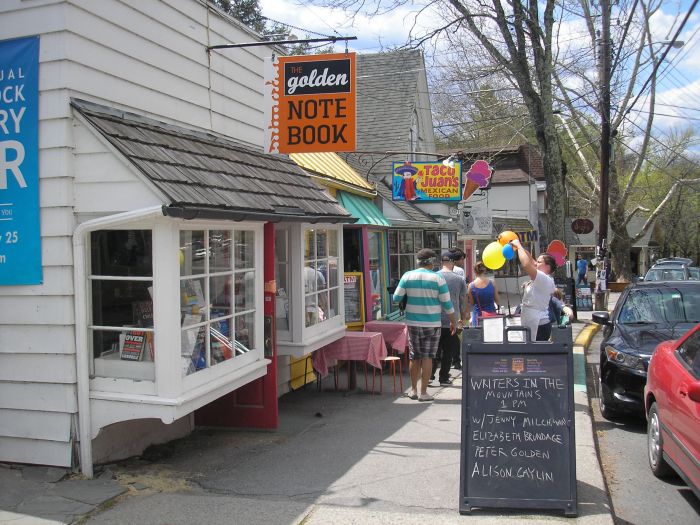 The panel discussion was moderated by Jenny Milchman. Jenny’s debut novel, Cover of Snow, earned starred reviews from Publishers Weekly and Booklist, as well as praise from the New York Times, San Francisco Journal of Books, the AP, and other publications. It was an Indie Next and Target pick, won the Mary Higgins Clark Award for best suspense novel, and was nominated for the Macavity and Barry Awards for best first novel. Her second book Ruin Falls, also an Indie Next Pick, was published in 2014 to starred reviews from Booklist and Library Journal, and chosen as a “10 Best of 2014” by Suspense Magazine. Jenny’s third novel, As Night Falls, will be published on June 30th, 2015.

Before I summarize the panelists’ remarks, allow me to make a few general considerations. Right before the panel discussion started, I googled literary vs. genre fiction. And the fastest answers I got were:

Last November Joshua Rothman from The New Yorker wrote A Better Way to Think About the Genre Debate (you can find full article here). Rothman pointed out that contrary to the general belief that genre fiction doesn’t get nominated or receive literary awards, Station Eleven, a dystopian novel by Emily St. John Mandel, made it in fact among the fiction finalists for the National Book Awards last year. Rothman also pointed out that novels such as Dostoyevsky’s Crime and Punishment are both literary and genre fiction.

Now going back to last Sunday’s panel, here is what the panelists had to say.

“I just like to write a good story. Booksellers find the distinction helpful to know where to shelve a book. And also publishers find it helpful to know how to market the book. There are many genres: romance, thriller, sci-fi, etc.”

Gaylin, a USA Today and international best-selling author, received an Edgar nomination for her first book Hide Your Eyes. Her Shamus Award-winning novel, And She Was, was also nominated for the RT award, the Thriller and Anthony awards. In addition to her six published crime fiction novels, she’s published the Young Adult mystery Reality Ends Here (Simon and Schuster/PocketStar). Stay with Me, her eighth book – and the third in the acclaimed Brenna Spector series – was just nominated for an Edgar Award for best paperback.

“I agree with Alison that bookstore owners need to know where to put the book, but it could backfire in a way. I like to call my books literary thrillers. Because I put a lot of effort in every sentence that I write. I think it’s mostly the way the books are marketed that had created this distinction. My last book Stranger Like You was marketed as a thriller, as opposed to my first two which were marketed more like general literary fiction. Stranger Like You sort of got lost, and people couldn’t find it. The distinction is not what motivates me to write; I just want to tell a good story. And I think what people like is some sort of driving narrative focus. The effort you put into character development is what makes a novel more literary – the voice of the characters and things like that.

Write a book that conveys your vision of the world.”

Brundage holds an MFA from the prestigious Iowa Writers’ Workshop, where she received a James Michener Award. Before attending Iowa, she was a screenwriting fellow at the American Film Institute in Los Angeles. Her short fiction has been published in the Greensboro Review, Witness, and New Letters. She is the author of three novels, Somebody Else’s Daughter, The Doctor’s Wife, and A Stranger Like You, all published by Viking. Her new novel, All Things Cease to Appear, is forthcoming from Knopf in 2016. 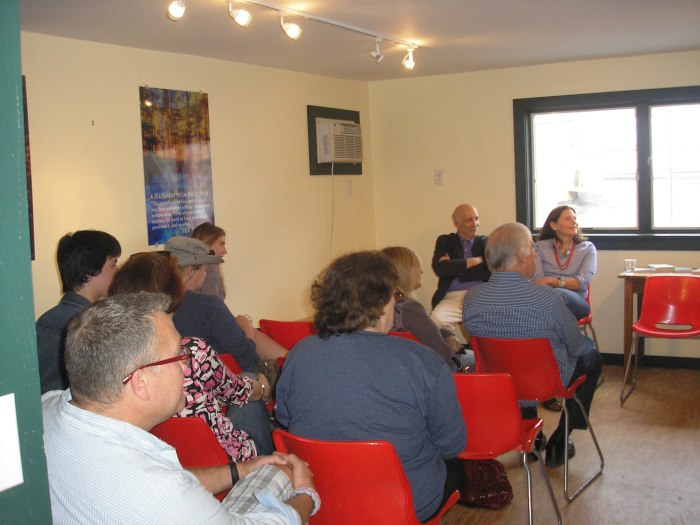 “I think this distinction became a problem for bookstores after WWII. It’s a post-war problem. Writers wrote for markets. But in the 1950s, early 1960s writers began to go to universities, and write for tenure. That was a different novel than writing for the markets. They needed different reviewers saying good things about their books. And then what happened was that people in the academia became very resentful of people in the marketplace, and vice versa. Hemingway wrote The Sun Also Rises because he wanted to become a commercial writer; he didn’t think he could make it by just writing short stories.”

Golden is an award-winning journalist and the author of six full-length works of non-fiction and fiction. His first novel, Comeback Love, was published by Simon & Schuster. Some of his work has appeared in the Detroit Free Press Magazine, Albany Times Union, New Jersey Monthly, Microsoft’s eDirections, Beyond Computing, Electronic Business, Midstream, The Forward, and Capital Region Magazine.

Going back to Jenny Milchman, a couple of days prior to this panel discussion, she started a Facebook thread, and engaged with fellow writers in a passionate, well-argued debate. One commenter remarked that good writing is good writing, and bad writing is just that – bad writing. Another one said that he thought at literary fiction more in terms of general fiction, whereas genre fiction is a clearly recognizable genre (or maybe even a niche genre, I would add). Yet another one added that it’s become fashionable to label almost anything outside of the genre fiction as literary, and that makes the label meaningless. One commenter discussed the dichotomy ideas vs. emotions: ideas as pursued in literary fiction by those intellectually oriented, and emotions as explored in genre fiction for readers looking to have an emotional experience. Someone else summed up that this is an overrated question, and that readers don’t understand or care about.

What are your thoughts about literary vs. genre fiction?

Art in the Catskills, The Definitive Guide to the Catskills’ Rich Cultural Life is a compendium of one hundred and twenty-three arts organizations, events and other attractions in the Catskills and surrounding area, some in the neighboring Hudson Valley, and others elsewhere upstate New York. The guide includes anything from museums and memorial sites to summer festivals, art galleries and residencies, as well as theater and literary retreats. It walks the reader through a wide geographic area, from Woodstock to Livingston Manor, and Saratoga Springs to Cooperstown. Easy to digest, Art in the Catskills is a great resource for art enthusiasts travelling through the region.