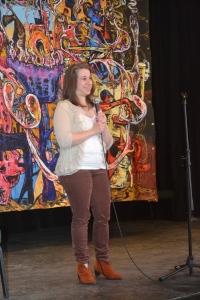 Writers in the Mountains (WIM) invites you to Writing Fiction Today – Literary vs. Genre Fiction: Real Distinction or No Difference at All? Sunday, May 3 at 1 p.m. at the Golden Notebook Bookstore, 29 Tinker Street, Woodstock, NY. The event is co-sponsored by Glaring Omissions Writing Group, one of the longest-running critique groups in the Hudson Valley.

What kind of book do you like to read? What form does your writing take? If you’re like most readers or authors or poets or scribes, an answer came to your mind right away. But what happens when we begin to poke at that answer? Is there such a thing as a literary mystery? Or an experimental novel with a secret at its heart? Can a poem mystify? Moderator Jenny Milchman leads a conversation with panelists Elizabeth Brundage, Alison Gaylin, and Peter Golden as they question the foundation that lies beneath bookstore shelving, library categorization, and the ways we define words on a page. If these divisions are arbitrary–or at least miss a great deal of what truly goes on in a work–then perhaps we can come up with something better. A meaning that helps us to identify and create what we all are really after… great writing.

Jenny Milchman’s debut novel, Cover of Snow, earned starred reviews from Publishers Weekly and Booklist, as well as praise from the New York Times, San Francisco Journal of Books, the AP, and other publications. It was an Indie Next and Target pick, won the Mary Higgins Clark Award for best suspense novel, and was nominated for the Macavity and Barry Awards for best first novel. Her second book Ruin Falls, also an Indie Next Pick, was published in 2014 to starred reviews from Booklist and Library Journal, and chosen as a “10 Best of 2014″ by Suspense Magazine. Jenny’s third novel, As Night Falls, will be published on June 30th, 2015.

Elizabeth Brundage holds an MFA from the prestigious Iowa Writers’ Workshop, where she received a James Michener Award. Before attending Iowa, she was a screenwriting fellow at the American Film Institute in Los Angeles. Her short fiction has been published in the Greensboro Review, Witness, and New Letters. She is the author of three novels, Somebody Else’s Daughter, The Doctor’s Wife, and A Stranger Like You, all published by Viking. Her new novel, All Things Cease to Appear, is forthcoming from Knopf in 2016.

USA Today and international best-selling author Alison Gaylin received an Edgar nomination for her first bookHide Your Eyes. Her Shamus Award-winning novel, And She Was, was also nominated for the RT award, the Thriller and Anthony awards. In addition to her six published crime fiction novels, she’s published the Young Adult mystery Reality Ends Here (Simon and Schuster/PocketStar). Stay with Me, her eighth book – and the third in the acclaimed Brenna Spector series – was just nominated for an Edgar Award for best paperback.

Peter Golden is an award-winning journalist and the author of six full-length works of non-fiction and fiction. Peter Golden’s first novel, Comeback Love, was published by Simon & Schuster. Some of his work has appeared in the Detroit Free Press Magazine, Albany Times Union, New Jersey Monthly, Microsoft’s eDirections, Beyond Computing, Electronic Business, Midstream, The Forward, and Capital Region Magazine.

Please come peruse a brand new gallery of books set up by the Golden Notebook, share drinks and light refreshments, and become a part of this very stimulating conversation! The event is free and open to the public. Book buying is encouraged to support our community bookstore.

Writers in the Mountains is a 501 ( c ) (3) not-for-profit organization with a mission to provide to the general public a nurturing environment for the practice, appreciation and sharing of creative writing.

View all posts by Admin